March 21 - special guest "The Beauty" Terry "Garvin" Simms as he talks about his times in Memphis, Continental, and World Class.
http://www.blogtalkradio.com/psp/2013/03/22/peach-state-pandemonium

Listen to internet radio with PSP on Blog Talk Radio


March 28 - I interview my co host Bobby Simmons and Jerry Oates about their years in Pro Wrestling. We talk about many legends of the ring like Dusty Rhodes, Ronnie Garvin, Dick Murdoch, and many many more!!!

Listen to internet radio with PSP on Blog Talk Radio
Posted by Beau James at 8:27 PM No comments: 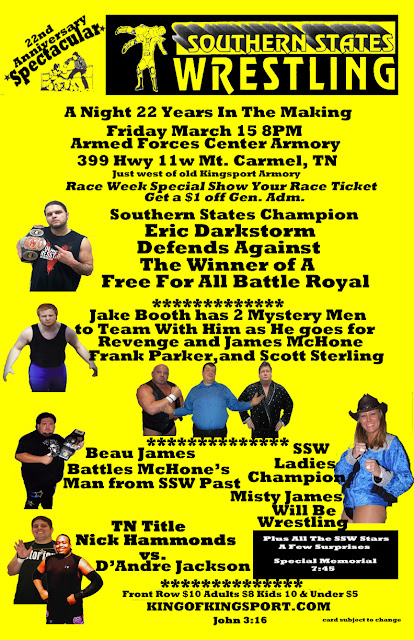 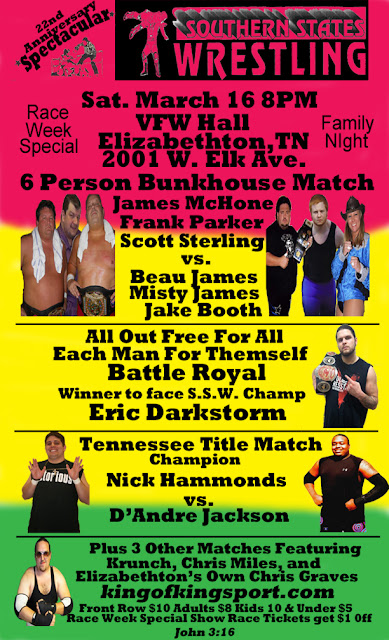 Posted by Beau James at 1:32 PM No comments:

wRESTle in Peace my Friend


Misty and I are heart broken. Over the past five years Percy Pringle III/ Paul Bearer has become such a special part of our lives. With in minutes of sitting down with him we were like old friends. Our love for our profession and the respect for our heroes were much a like.

He grew up going to the matches dreaming one day to be apart of this crazy world of wrestling as I did. He like so many others did what ever it took to be a part from selling pictures, taken pictures, putting up the rings etc. I think that's why we hit it off so well we could identify with each other. No I never was or will be a WWE Legend but I chased my dream and caught it. He chased his dream and was the first to tell you it became more than he ever thought it would be. He was happy to be in wrestling and humble at what he became.

He was one of the first to buy my  book. Over the past two years he has helped me sell many copies just by telling people how much he liked it. He did TV segments for me, and wrote the back cover to my new book not for money ,but just simply because I asked if he would.

We would talk by phone, text, or social media at least every couple days. He would always check on us on weekends he knew we were on the road as we did him. Every Saturday during NCAA football season I would get a facebook message or text that simply said "Roll Tide". He knew the response he would get back with my blood being Tennessee Orange. Every year after the Alabama vs Tennessee game he would ask can we be friends again? He knew how to make you laugh.

In February 2012 I had a health scare with a growth in my stomach wall. Two days in the hospital and a few days at home in bed after it. He called every day to check on me and to make Misty laugh. That was the kind of guy he was.He wanted to take the stress of her.

About six months ago he sent a message and said you and Misty should bill yourselves as "The Dynamic James Wrestling Duo" since then we have. This past Saturday he presented us with an award that means more to us than anything we have ever gotten in wrestling "The Gulf Coast Wrestlers Reunion, Legends Award". We were told by board of directors members that our friends Bill Bowman and Percy Pringle pushed for us to receive the award. Never did we think we would lose Percy just days later.

The award means a lot to us , but his words in the presentation mean even more. This along with a private conversation I had with him later that day will be our last memories of him. He left every wrestling fan of the last 35 years with many memories. He had many names but the one I know him as is Friend.

Tuesday night Misty talked to his son Daniel. Daniel made sure to tell us that "My Dad Loved You Guys". We knew that and we hope that he knew we loved him.

We know that he is now in Heaven with his wife and loved ones. He had a strong faith in our Lord. I don't think he realized the lives that he touched. I know I feel like a better person from just knowing him.

Awww Percy keep a spot at the table for us. I never say good bye, only so long. Until I see you again. So Much MY FRIEND So Much

When I heard that you had left us
I was simply blown away
How could that be possible?
We were laughing Saturday.
Your dry wit and your humor
Your ‘grin’ and devilish smile...Oooo YES...Oooo YES
No one knew what you’d do next
You had one unique style!
O How I waited with a smile
You truly had a special gift no doubt.
Always there for everyone
So dependable, sincere
Kind, gentle and caring
Felt good to have you around.
So, my dear departed friend
I’ll think of you each day
Peace and rest and comfort
I know you found Tuesday.
Your last words to me
Will help my tears to dry
You hugged me and said,
"see ya, love ya, bye!”
Posted by Beau James at 1:29 PM No comments: