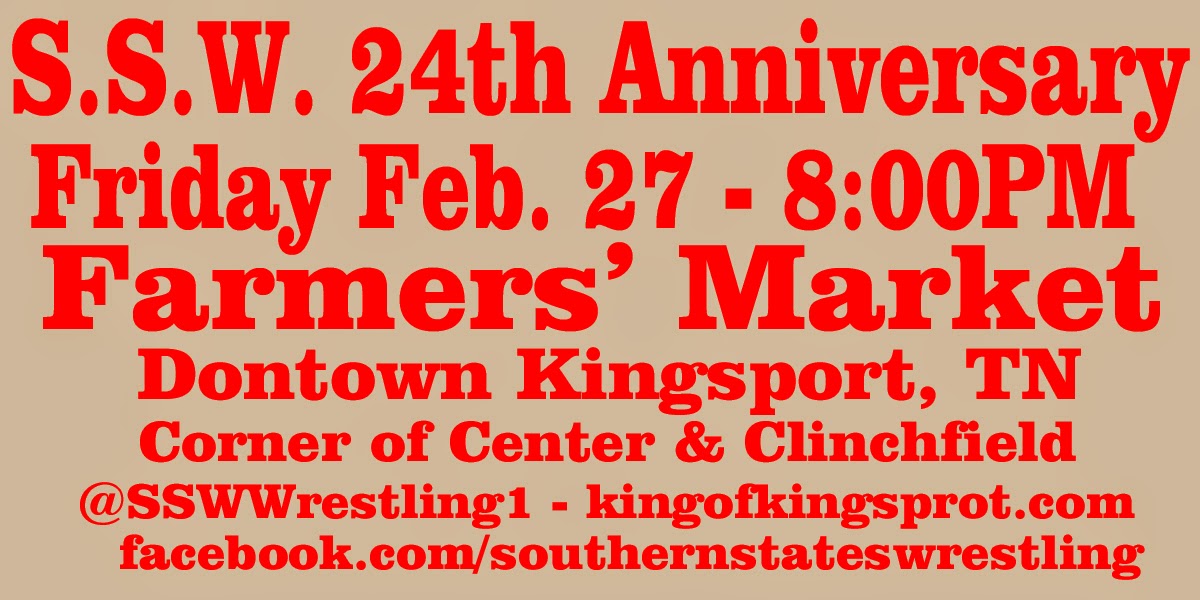 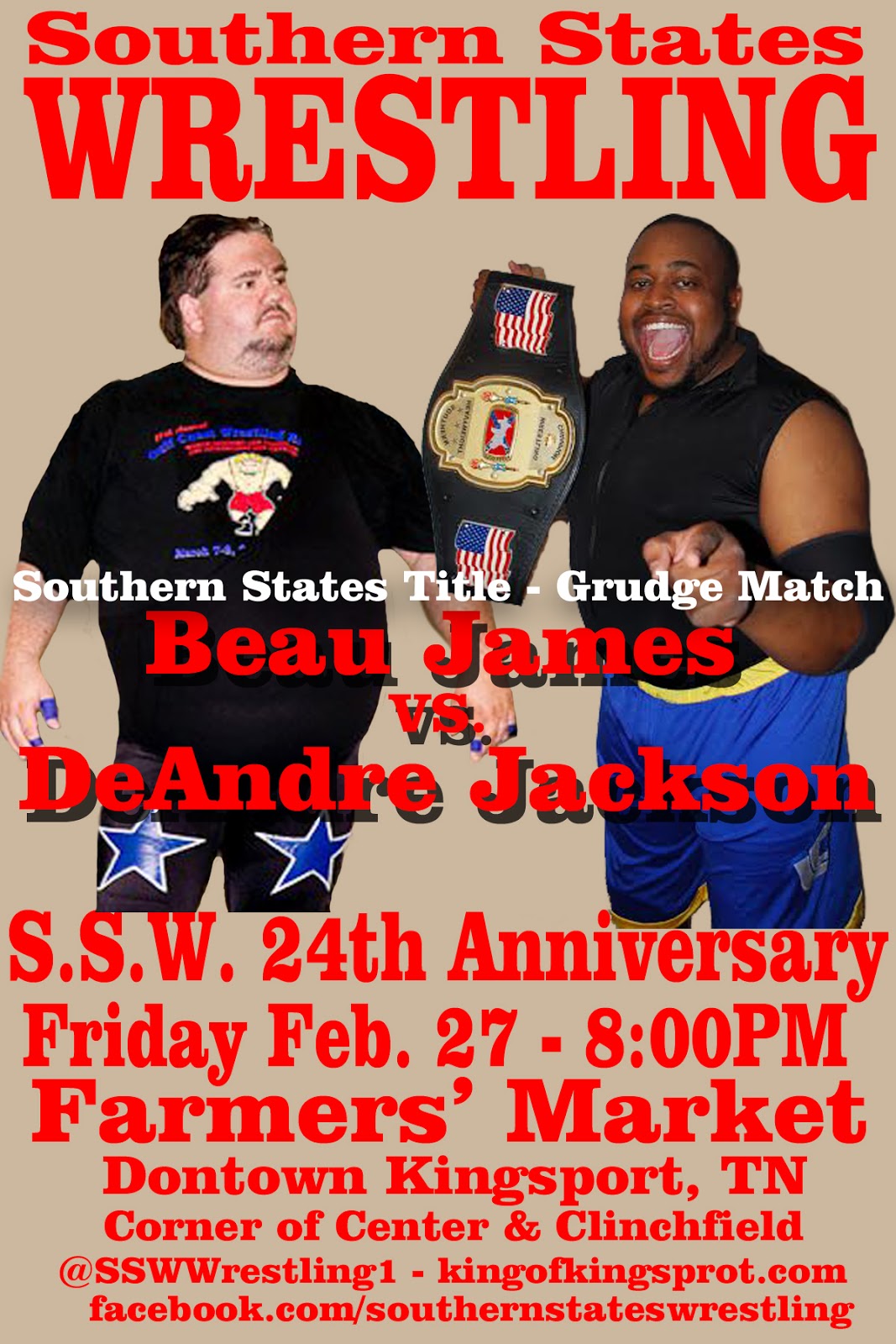 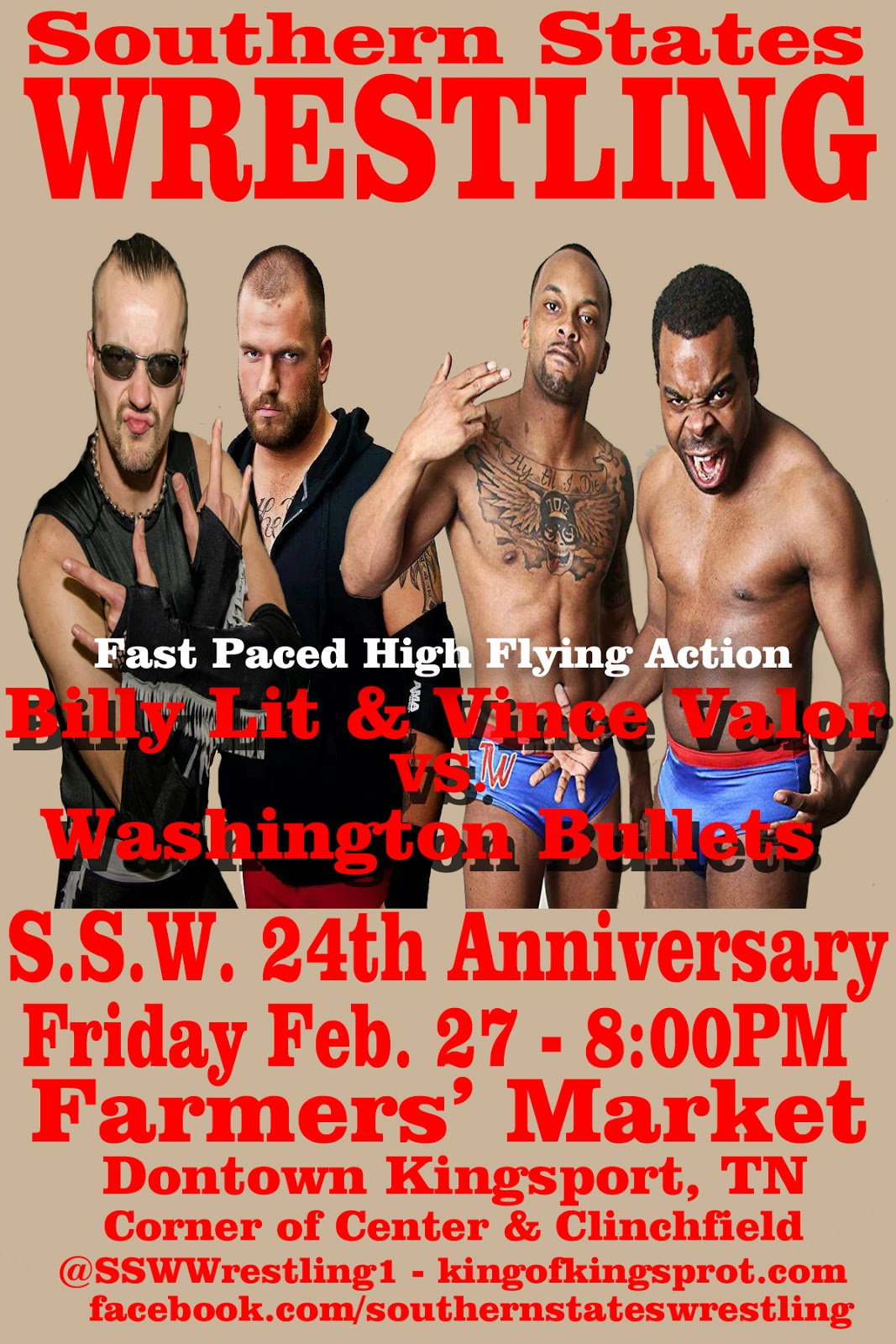 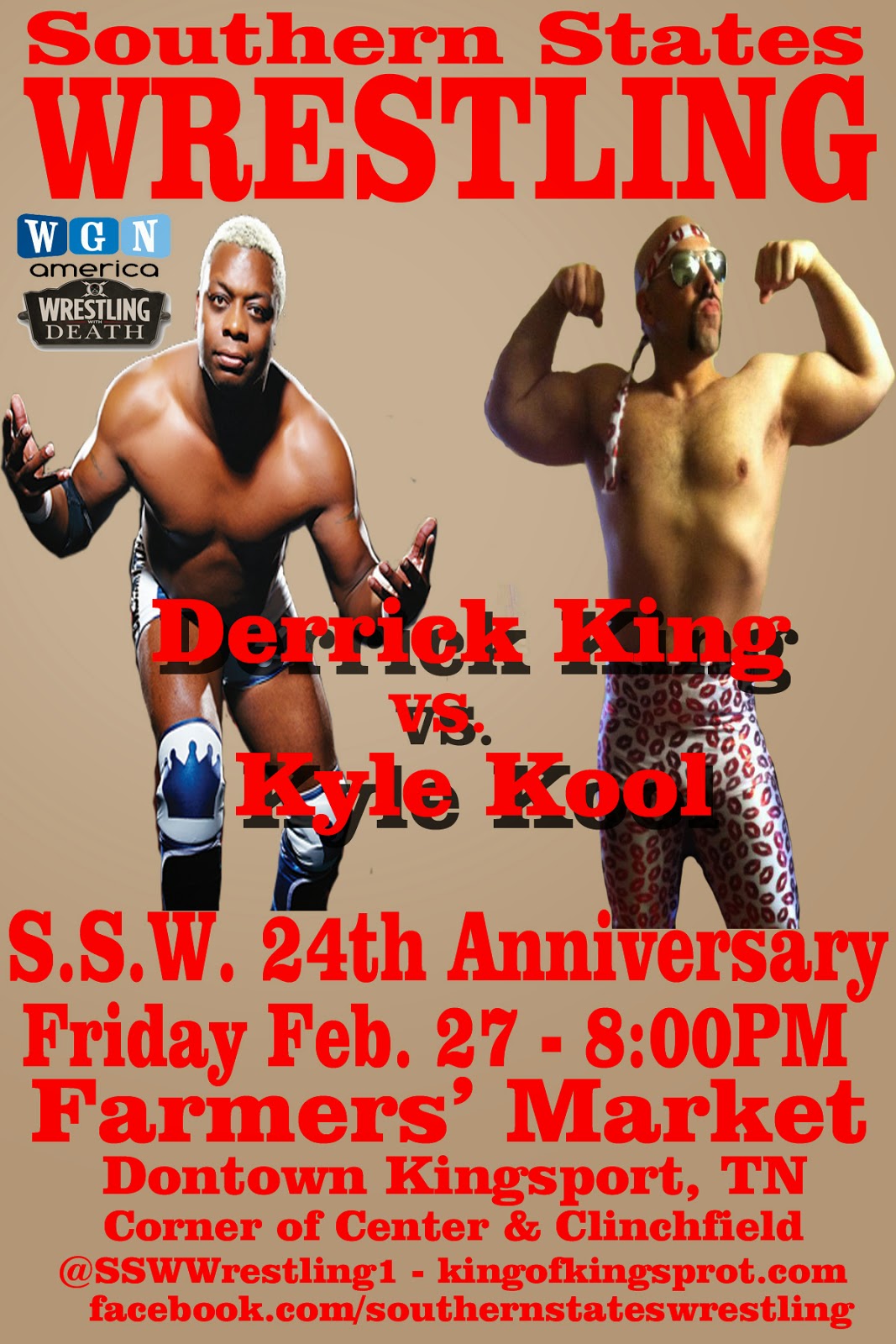 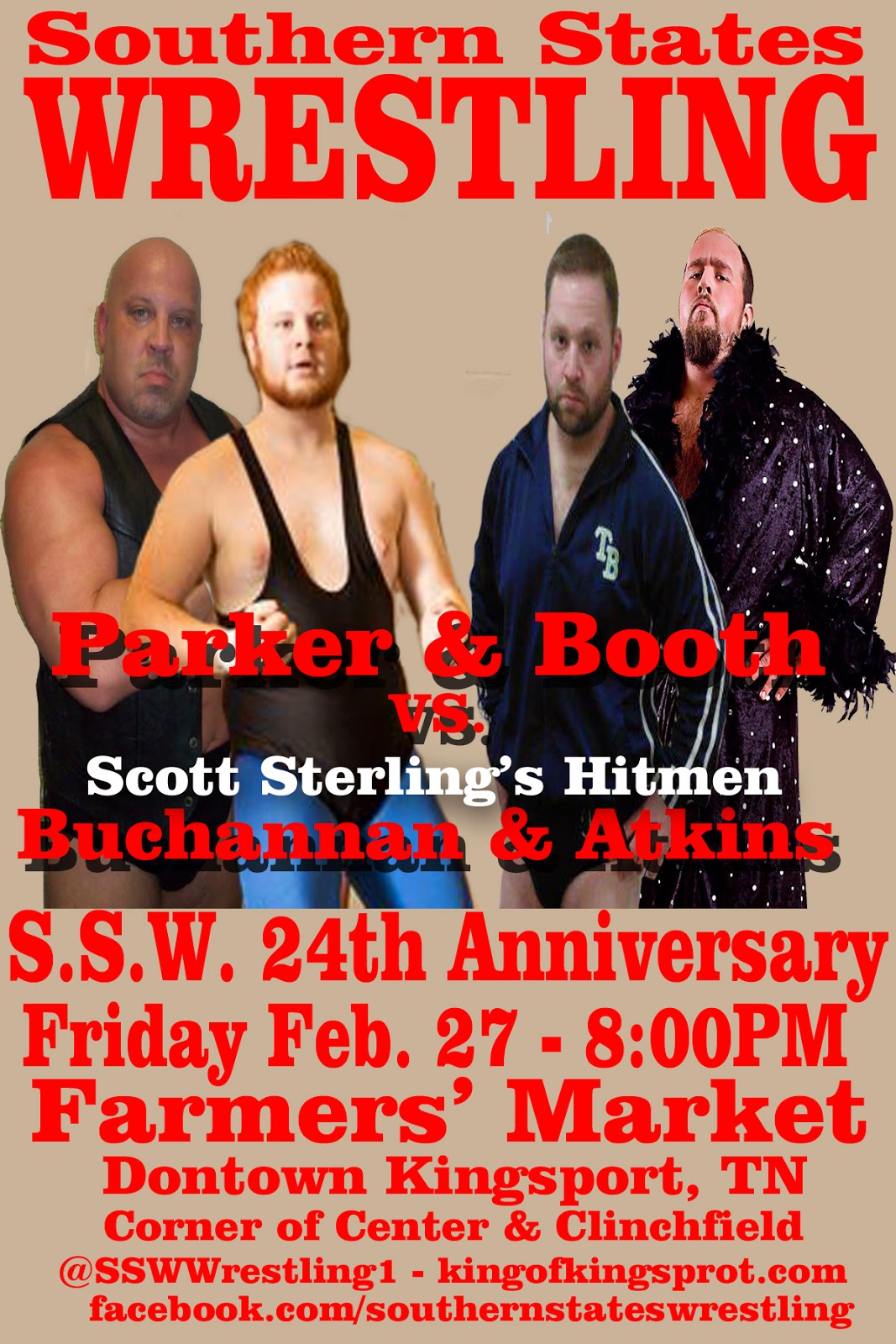 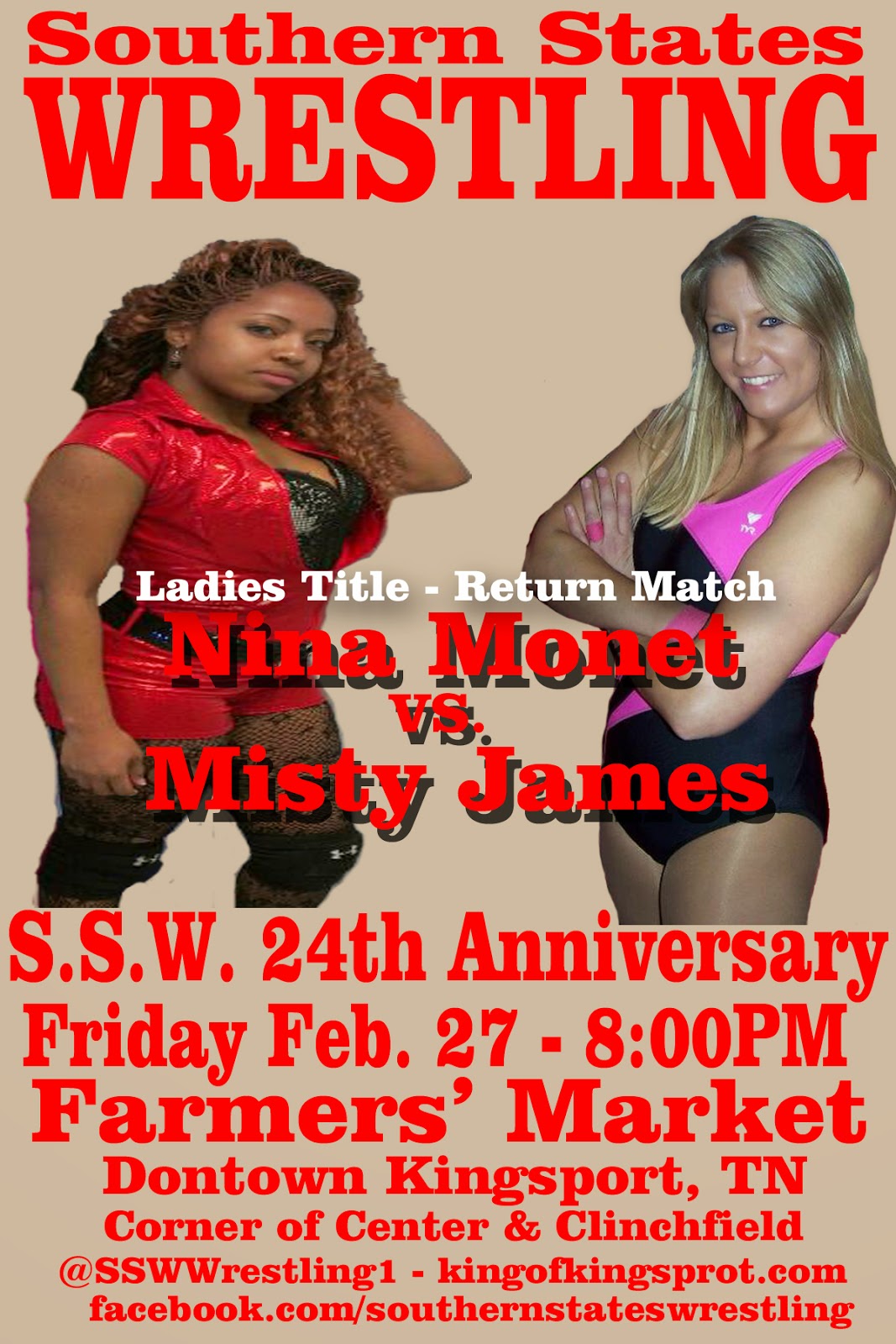 All of These Matches and Much More!!!
Vip Tickets on Sale Now $15 top Right of This Page includes Front Row Seat & Meet & Greet at 6:30PM
*card subject to change

Posted by Beau James at 8:31 PM No comments:

* Misty and I have started back with WVCW out of Princeton WV. We will be back at the next big TV Taping at The Princeton Rec. Center. If you are in the area hope to see you there.

* It's Almost time for our 24th Annual Gulf Coast Wrestlers Reunion. Misty and I are always excited to spend the week on the Gulf with dear friends.

* I have returned as co host for the Peach State Pandemonium blog talk program that is Thursday Nights at 8pm est. If you you miss us live you can always go back and listen to the archives. PSP Show

* Thanks to everyone who watches The Southern States Wrestling Power Half Hour. Just a reminder like the PSP program. If you miss us you can watch anytime at youtube.com/kingofkingsport

Posted by Beau James at 8:21 PM No comments:

The return of the Washington Bullets, Kyle Kool, and Derrick King 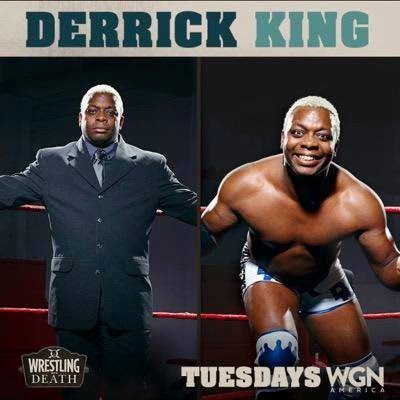 Before he was a Memphis Wrestling star, Before he wrestled in OVW,TNA, or WWE. Derrick King wrestled in SSW. You can see Derrick every Tues. 10pm est on WGN America's "Wrestling With Death". 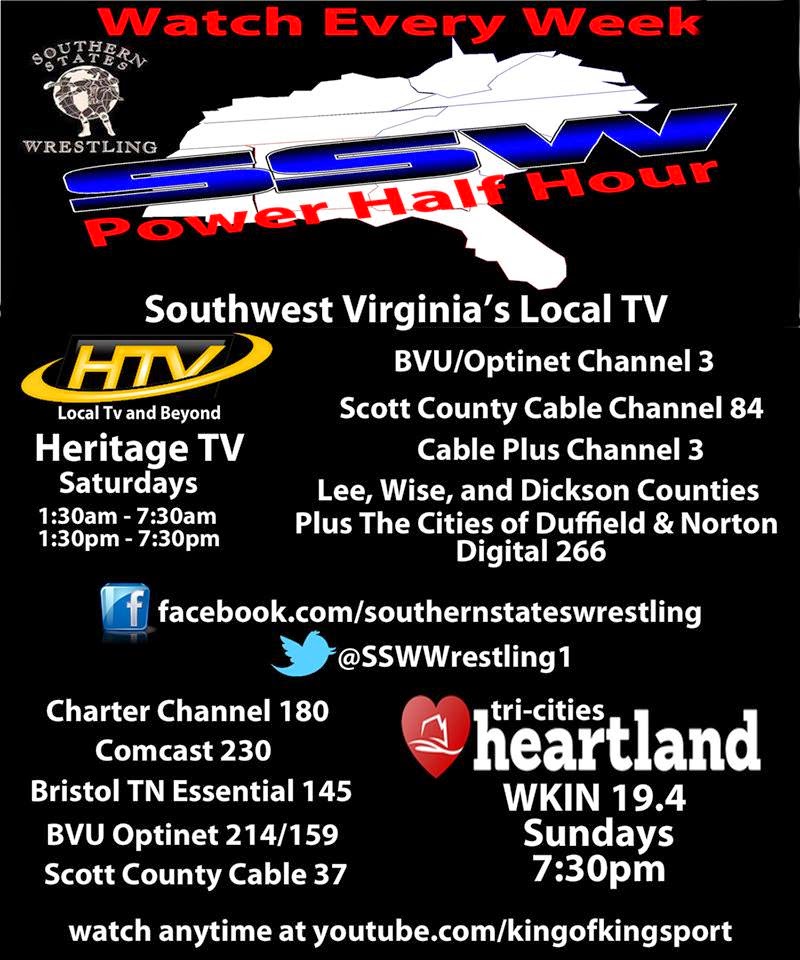 These Eyes Have Looked Into The Eyes of Greatness

This past weekend while taping interviews for my upcoming match with DeAndre Jackson I told him to realize "when he climbs in the ring and looks across the ring into my eyes, realize that these eyes have looked across the ring into the eyes of some of the biggest names in wrestling history". It got me to think of how blessed I have been in my years in wrestling. I have been able to wrestle well known stars that cross generation gaps.

I grew up watching and reading anything and everything I could wrestling related. As a kid I wanted to meet these men and women. I wanted to be apart of what they did. Some I have come to know well and some I wish I never met. Some I never thought I would know much less be in the ring with. Right at top of that list is the often imitated but never duplicated "Fabulous" Jackie Fargo.

If you grew up a fan of Tennessee Wrestling you know all about The Fabulous One. His name alone could sell out buildings in Memphis, Chattanooga, Nashville, Louisville, Birmingham, Huntsville, or any other city that the Gulas - Welch Promotion went.

Before coming to Tennessee he was a draw in New York, Chicago and Boston. He was a superstar before there was such a thing. He retired from full time competition in 1980. Over the next few years to follow he would make a come back once or twice a year and pop the attendance in the Memphis territory.

The Fabulous Fargo Brothers (Jackie, Don and Roughhouse) belong in any and every form of a Wrestling Hall of Fame. I first met Fargo in Louisville, KY at the "A Night To Remember" event celebrating the history of wrestling in the Lousiville Gardens. Never at any time in my life did I ever think I would be in the ring with him.

In 2006 my friend Bobby Fulton called and booked my for an event in Granite Quarry, NC. He said it was festival that the city puts on and they had called Fargo who lived near by wanting wrestling. Fargo did not want to deal with the hassle of running an event so he hooked Bobby up with the festival.

The event was held on a hot September afternoon in a city park. We dressed in a small block room on the end of a picnic area. I was sitting in the hot room talking to Tom Prichard when Bobby came up to us and said "you are not going to believe this". We asked 'What?". He told us "Fargo wants to wrestle!. That afternoon I stepped into a ring with a hero but that was not the biggest part of that afternoon.

A friendship was formed that day between myself and The Fabulous One. I was blessed to not only be apart of his last match but also his in ring altercation. He made a couple trips with Misty and me. I kept in touch with him. I even spent an afternoon over at his hangout "Fargo's Place".

My friend Bobby Fulton was part of a tag team called "The Fantastics" it was based on the Fabulous Fargos. They ended up living in the same town China Grove, NC and be coming very close friends. We talk about Fargo often. He was one of a kind, an American Original, an Icon, A Legend, but on top of that list he was a friend.

Thank you lord for my heros turned friends. Below is the videos of Fargo's last match at the age of 76. Also him saving the day in Tullahoma TN at the age of 79. No matter his age. No matter where he was wrestling fans loved him.