I want to wish each and everyone of you a Healthy and Happy New Years!

The BIG annual Christmas Sale ends tomorrow night at Midnight. If you have not already checked it out scroll down this page to see the deals.
Posted by Beau James at 7:08 PM No comments:

Happy New Year to you and your Family from everyone at S.S.W. We thank you for checking out and subscribing to our network. The holidays slowed us down a little bit but we are bringing a BIG month of classic action to The Network in January.

If you have been with us from the start of The Network in July. You have seen as we have taken you from July through December of 1999. Starting next month we will bring you January to June 1999 TVs and live events. Including The Little K Town Showdown (Jan. 99), Rumble in The Mountains (Feb. 99 Boone NC) A Night To Remember '99 The Hall of Fame Night (May 99),

We also start this coming month with January 2000 TV and will take you through that year as well with TV and Live Events. Many That have never before been released before.

We are also working with promotions we have partnered with over the years to bring you classic footage from these promotions as well. We start with Tennessee Championship Wrestling

Here is what is coming to The S.S.W. Network in January

Brawl at The Mall - 1/28/92 Kingsport, TN (Fan Cam)
-The Russian Assassin vs. California Kid
-an Assassin and Ultimate Superstar vs. Ninja and Jeff Tankersley
-Sweet Ampne vs. Keith Hart
-Wayne Rogers w/ Al Bass and Stan Lee vs. The Equalizer and Jamie Gibson
-The Heart Breakers and Stan Lee w/ Godfather vs. The Young Guns and Bobby The Body

SSW Sunday TV Special January 2000 Highlights From Little K Town Showdown 2000 taped at Kingsport National Guard Armory - Hosted by Joe Wheeler and Buddy Landel
Giant Ron Ray and Flex Armstrong vs. Death Row 2000
Brian Overbay vs. Mike Cooper
Appalachian Title Beau James vs. Chuck Jones (c) w/ The Duke of New York
Southern States Title Bryan Wayne vs. The Warmachine (c)
Beau James and Ricky Harrison settle who the Wrestler of The Year is
Highlights of The K Town Rumble
plus several interviews and a wild brawl with Two 7ft Giants that goes across the Armory and out into the parking lot

All of this and more on The S.S.W. network in January!!!!

We love hearing your feed back about the network. Let us know what you like and who/what you would like to see more of?
Posted by Beau James at 7:06 PM No comments:

Please note that Southern States Wrestling has a new Youtube Channel. Please subscribe so you can watch NEW episodes of S.S.W. and keep up to date with what's new on the S.S.W. Network.
You can do so by clicking here NEW S.S.W. Youtube

Merry Christmas everyone! Southern States Wrestling TONIGHT at The Model City Events Center 201 E Center Street Kingsport,TN. The venue is next to WKPT TV/Radio Station. Plenty of parking on Center and Commerce Street. Belltime 7:30pm. We will open the night with a tribute to Ken Bowles. Five big Matches. Santa will be there taking Pictures in the ring with the kids. All seats are ringside!Plus a special Christmas Message. All seats are only $5 plus a canned food item for Hunger First. If you can donate more that is wonderful. 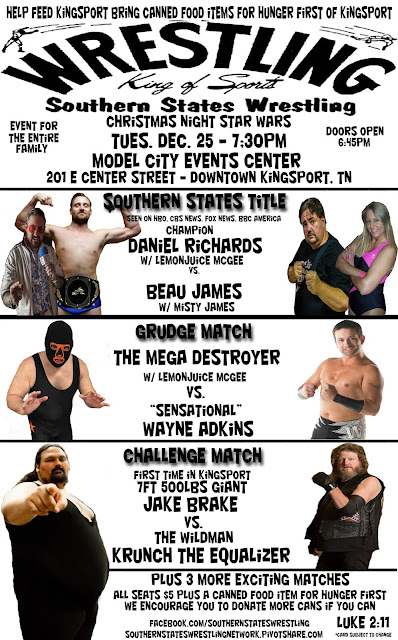 Posted by Beau James at 6:36 PM No comments:

Join Beau James as he updates you on The Fall Spectacular 2018 and The Southern States Wrestling Network. We pay tribute to Ken Bowles, Big Rig Jake Brake is in action, and Daniel Richards battles Jessie Jameson

Posted by Beau James at 7:41 PM No comments: