Reviews of my Book are coming in 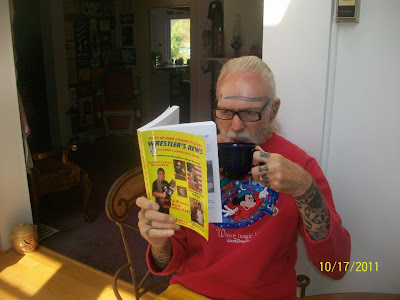 I give the book on a 1 to 5 scale 5 suplexes. I have known Beau James since he was a teenager. His story is a must read for anyone who ever had a dream. I learned so many things about him from this book. He is very open and honest about his battles and struggles. His story of overcoming so many obstacles is an inspiration. His journey to find happiness and peace could be a movie. And his love story with his beautiful wife Misty is the feel good story we all search for.

Handsome Beau James, just read the book in a day,man i couldnt put it down..It really helped me by reading it


As I sit here writing you this message, I have literally just laid your book down after reading it in one sitting. Parts of your book reminded me of my first conversation with you, all those years ago, that first conversation i thought you were so f'n arrogant lol, but i also knew then that you had said the gospel to me, and I learned more about the business in that 45 or so minutes talking to you then I learned from the guy who took my money and almost ruined me before i could get started. Thank you for the reminder.


beau, i just got my copy of your book and wanted to just write you a bit here.i have read only the first chapters, but i have to say,honestly,thank you! let me explain if i can..

you,like myself,are old school wrestling fans.we remember the east tn wrestling scene from the early 80's till now.we remember the old mid atlantic tv shows and the monthly show at the db dome, as well as the
nwa,awa,and so many shows.you mention most of them in your book.


as i read those first 2 chapters, i was flooded with my childhood memories of these shows.i just was like you, excited to see the shows,and could not wait to watch them when they came on.as you know about me, i was going to the kingsport shows as much as i could.i would save up my allowance for them,and barely have enough to buy my ticket and maybe a hot dog or a get a picture.i would watch religiously just see or hear of when they would be coming back so i could start saving up again.beau, both me and you both share a deep love and appreciation of the shows and the wrestlers.we felt the excitement of pulling up to the shows and cheering or booing for whoever we liked at the time.i know i felt a little giggly when i would finally have my ticket to the show in my young hands.

i felt this way for years.i went to the shows for years.i met several wrestlers over this time,such as terry taylor,jimmy vailant,and others.i can remember yelling at ivan kollof that he sucked as he passed by me as he walked to the ring.followed by having him stop,look at me straight in my eyes and threaten to kick my butt right then and there.i have so many memories that came flooding back to me from long ago.back when i was only 11 or 12 years old.i remember some of the walmart autograph signings!!


i am sure that me and you must of went to a lot of the same shows as kids,we had to of..your recalling of them are identical to my memories.your excitement and passion for the sport was every bit as good as mine.the differance between us being,that you eventually followed your dreams,and was lucky to get the chance to be a wrestle


your book brought back a lot of fond memories for me from my childhood.some i had forgotten all about.while me and you have followed 2 differant paths in life and in our passions..i think we still share a commen love-PRO WRESTLING!!

I guess what i have tried to say or have hoped to say to you is,thank you for the memories you have brought back as well the ones you given me as a fan