The New Year kicks off for not only The James family but the stars of SSW.NWA Smoky Mountain, PWF and Stars of Wrestling this Friday night.
This event is a big deal not only for the wrestlers but the fans as well. I started in in 2009 trying to get an event like this together. Thanksgiving 2010 SOW wrestlers were featured on a SSW event. In January 2011 I had a meeting with NWA and PWF official to bury the hatchet and work together for the sake of our profession and to give the area wrestlers more matches with quality promotions. 2011 was a great year here in the Tri Cities. 2012 is starting off with a bang and I hope that all the promoters can continue to work together. This area is special, it has a rich history of pro wrestling, top young talents and seasoned veterans. Many of the Stars here are seen on local and internet TV which has lead to them being contacted and them going to perform for promoters all over the east coast. When we go to the ring in other areas we are proud to represent  our home area. And with out our great fans here at home supporting us and talking about us on line we would not get the recognition aboard. Thank YOU! 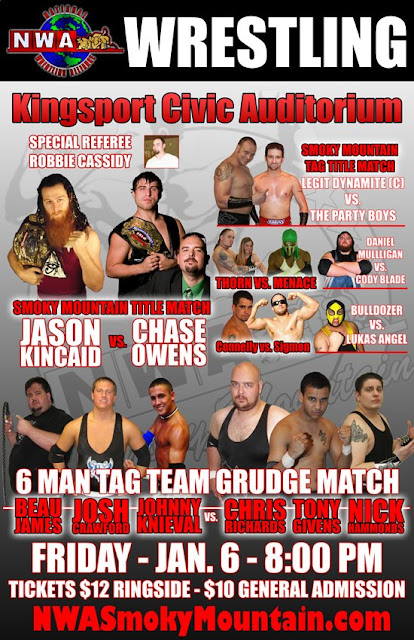 Lets Not forget about PWF's New Years Bash 2012. I'm very proud of these young men who have built this promotion. At times I have been vocal in a negative way about PWF. It took them a while to grow and understand my profession. They still are learning but I have been on most of their events the last year and I have seen the heart in theses guys. I have given them a pat on the back when I felt the deserved it which has been many in these past months. I'm proud of guys like my cousin Josh Crawford, Daniel Mulligan, and Johnny Knieval to watch them grow as not only wrestlers but as men the last year. It is my honor to team with Josh on this night. And don't forget Misty will also be in action teaming with WWE Hall of Fame Member Jimmy Valiant. 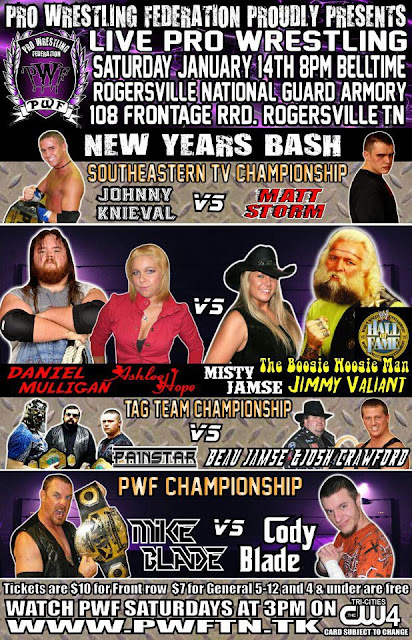