It does not matter who is in Kingsport, Ron Wright is still the King 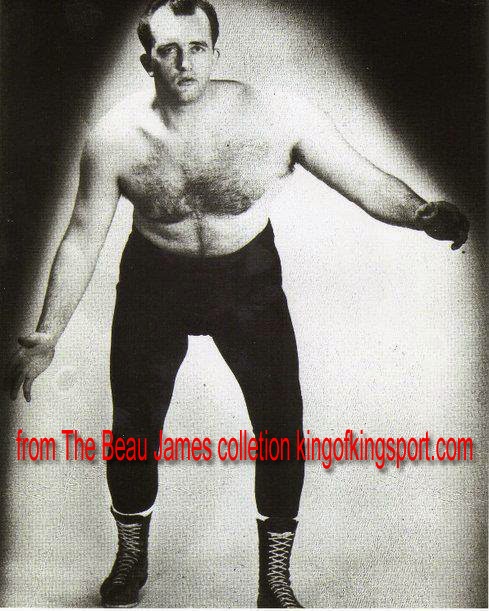 Was awakened this morning with awful news and have seen it on Facebook several times but was waiting to hear from one of his family members. The Legend - The King of Kingsport, The Number One Hillbilly, The Crusher, The Motor Mouth, Sweet Love able Scientific Wrestling Ol' Brother Ron has left us.

Ron Wright is a name that I had heard from birth. My family being wrestling fans knew all about him. I would hear stories of how mean he was and what he would do in a match to win from using a lit cigar, to brass knuckles, to an ether soaked rag. He was the man people loved to hate. I missed Ron's in ring career but I knew all about it as did any wrestling fan in this part of the world.
Ron was born in Rogersville but grew up in Kingsport. He was a regular at the weekly wrestling matches as a teenager watching the likes of Bill Canny, The Corsica Brothers and all the stars of the 1950s. It would not be long before Ron started his own journey to stardom.

Like brother Don, and friend turned foe Whitey Caldwell sports was a big part of their life football and wrestling being a part of most afternoons according to Don Wright. Their first mat experience came at the old Kingsport Boys club were they were stand outs and stories about them caught the ear of local promoter Mickey Baarnes.

In 1956 a local boxing promoter and independent (outlaw) wrestling promoter named Buddy Russell ran a card at the Kingsport Civic Auditorium. The event drew a large crowd not for the boxing but to see two young kids from the boys club who would become legends take their first steps into a ring. It was not long before the two were working for Micky's established office out of KIngsport. 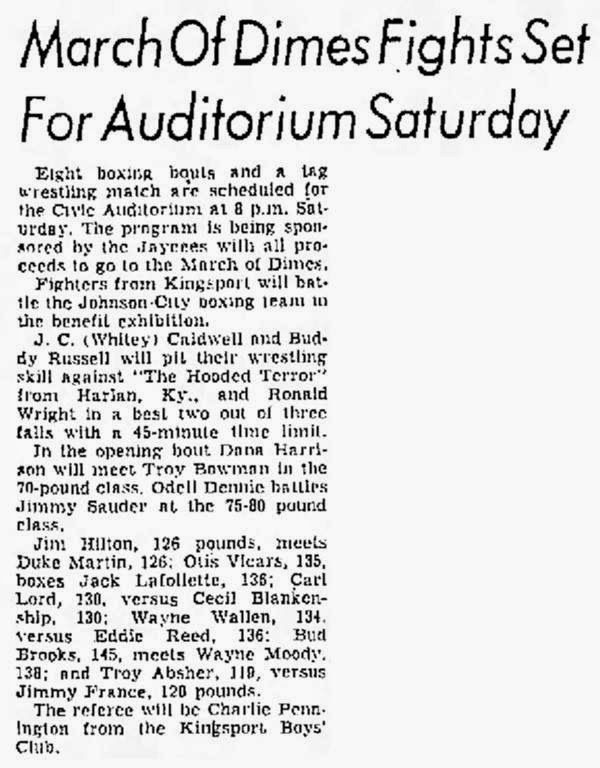 Whitey who was a couple of years older would start wrestling first and Ron working as a referee. The two young men would be in the ring nightly with the top stars of the day. Whitey headlining cards in just over two years in his home town. That was unheard of. Ron would get his break in 1961 in a match with Whitey on local TV where the part time preliminary wrestler and part time ref would throw the TV champion out of the ring so hard Whitey ended up breaking his shoulder and being out of the ring for a year. That's how the feud started and Ron was catapulted into stardom. 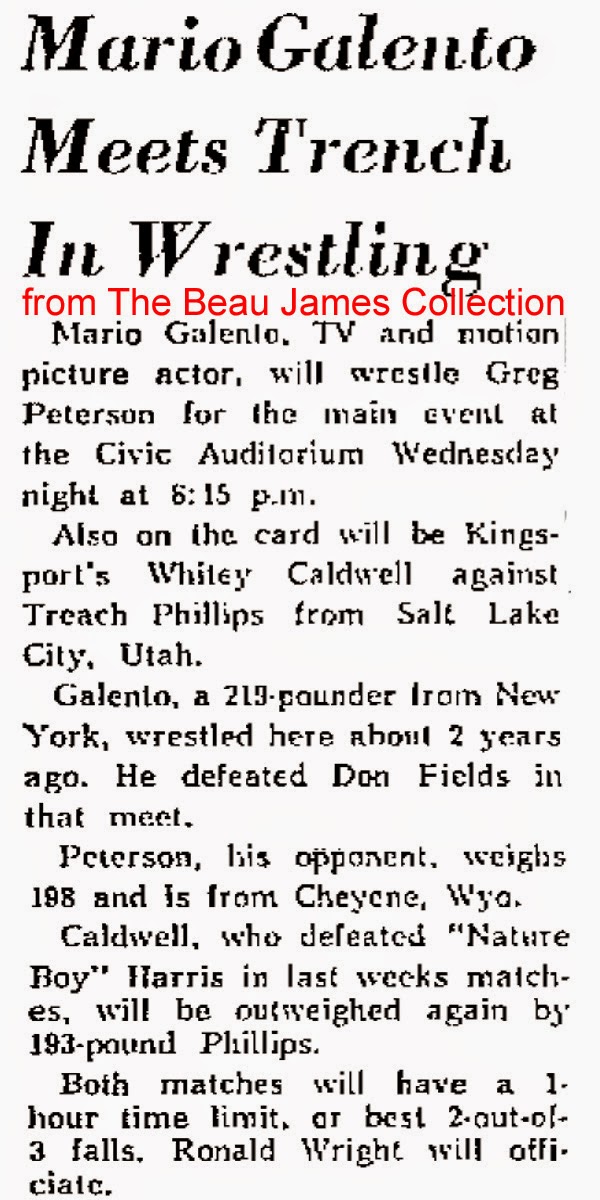 In the 1960s wrestling was King in this region. Matches were ran weekly in Kingsport, Johnson City, and Bristol. Plus two other events ran a week around the area in local schools and Armories. Events in Johnson City and Kingsport were capacity or near that every week with 20% of the gate and the concessions sales going to the cities Parks and Rec. Departments. Most of the funding for the year came from wrestling events. They were on average drawing what was equal to 25% of the city population monthly. The next time you go by a local park, ball field, The Civic, the old Johnson City Rec. and old Kingsport Armory take a minute an realize wrestling either built them or kept them funded for years.

One wrestling event featuring Ron in April of 1965 drew over 1200 people to the Gate City, VA High School. The event was a fundraiser for the sports programs. What stands out about this event is that the population in the city at the time was just over 900 people.

When you are drawing houses like that and that percentage of the population its not hard to understand why the name and legend is still talked about so often 50 years later.

Many of these packed houses were due to one simple fact people were coming to see Ron Wright lose. One myth is Ron wrestled Whitey every week. That is not true Ron had big money feuds with men like Lester Welch and Danny Hodge just to name a couple.

Another myth is that Ron teamed with his brother Don every week. Once again not true Ron had a successful pairing with Tiny York (another East Tennessee great aka Jim White) and manager Fred White (Sam Bass). Also Ron nor Whitey were on the local cards every week. They would take breaks for weeks at a time so when they came back it was exciting and fresh.

The one truth that is still talked about here by any fan of the era is that with out a doubt Ron vs. Whitey was money from Kingsport to Knoxville (ran separate from Kingsport till 1975) any match with these two across the ring from each other was box office. A match in the pouring rain at the famed outside Chillhowie Park in Knoxville with The Wrights vs. Whitey Caldwell and Les Thatcher sold out!

Also did you know Ron and Whitey were Southern Tag Champions in 1966? Ron had a few runs here as a fan favorite.

For every story that is out there about Ron's matches there is as many about the riots he started and him fighting the fans. In the 60s Ron was sued by a fan who went after him. The local paper said with one punch Ron knocked out four teeth and broke and jaw. Now that is a punch.

I have spent the last 20 years interviewing wrestlers of the time, researching the matches in the library and the last year putting the history of Kingsport Wrestling into words for my new book. It will be a great read for any wrestling fan of the time or today. I could list many more facts and stories about Ron here but I want to take time and mention my personal memories of him.

In 1987 Ron started showing up once again on TV in the region for Ron Fuller's Continental Wrestling. Ron had been away from wrestling for several years and living in North Carolina. It was some what of a shock and excitement when he showed up and got involved in Doug Furnes matches. To me it was my first time seeing and hearing one of the greatest talkers of all time. I had seen Ron with Southeastern and All Star Wrestling but was too young to remember it.

Fuller was getting Knoxville ready for his knew promotion USA Wrestling that he started after selling the Southern end of Continental. With my first times seeing Ron I understood what all the talk was about you can look far and wide and I don't think you will ever find anyone that could get the heat that Ron could by just talking. His actions around the ring were sneaky, and with him just standing up out of his seat he could bring everyone in the arena to their feet.

In October 1988 I promoted my first wrestling event for Continental Wrestling through Ron West. Right there in the Main Event was Ron Wright managing Moondog Spot vs. Ron Fuller. The success off that town got me others. Yes I did the street work but the main event drew the house.

In 1991 I promoted the first ever wrestling card that was a part of Kingpost's annual "Funfest" it still stands as the biggest attendance for any Southern States Wrestling card. Right there in the double main event was Ron Wright managing his brother Don and proteges Tony Peters and Wayne Rogers.

In 1992 Jim Cornette's Smoky Mountain Wrestling reintroduced Ron to a new generation of wrestling fan. With the TV, news letters and magazine coverage SMW got Ol' Brother Ron was back in the spot light. Shortly after came the internet which helped tape trading explode. Today these tapes are showing up on youtube and social media assuring Ron's work will live on.

Over the years both Ron and Don have been very good to me and my family. Both have appeared on several events for us. Both have did TV interviews for SSW. Both have given me great advice about wrestling and booking.

The best thing I got from Ron came at a chance meeting one night at a local Shoney's Restaurant. My Dad and I went in coming back from a wrestling card and Ron was in their with family coming back after a race. I had just signed with WAPK TV to start showing Southern States Wrestling. I was telling Ron about it and I asked him "would you mind if I did an interview calling myself "The King of Kingsport"?". I knew it would upset people and get heat. (still does) It was a title Ron had used in TV interviews, he had heard Bill Canny use years earlier. Ron said not at all go ahead and use it he said in fact you can challenge me on TV. I did both and it got the reaction we wanted.

A few years later Ron showed up to an event at Civic Auditorium unannounced and went out to the ring and helped me in a match. It was a great surprise for me and the fans. I have many in ring moments with Don Wright but that was my one and only with Ron. Thanks again Sir.

Ron Wright is one of the good guys of wrestling. He was for the business and the boys. He never showed me or anyone around me any kind of ego. He was always ready to do what we ask ed when he was apart of our events. He was down to earth. He loved his family. He loved his home region. He loved wrestling.

He is with out a doubt to this area what Jackie Fargo was to Memphis, Johnny Weaver was to Carolinas, and Mr. Wrestling 2 was to Atlanta. The only thing different is he was home grown. He is ours. Ron is an East Tennessee Original. He leaves behind box office records that will never be broken, memories that anyone that ever saw him will cherish . And many fans, friends, and a family who love him.

This weeks SSW TV will be a special tribute to Ron as we will show clips of his career and relive his legacy. Thank you Ron for everything you gave us inside and out of the ring. God Bless your family.


thanks for reading
Beau James
kingofkingsport@gmail.com