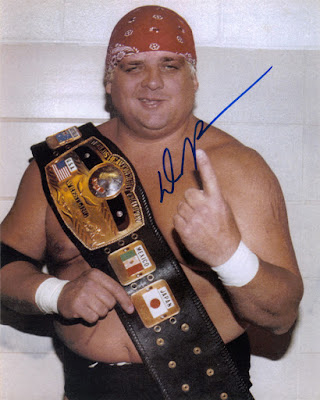 Very sad to hear of the passing of  "The American Dream" Dusty Rhodes. He was a three time World Champion when that title meant you were on top of  Pro Wrestling. He created Starrcade, The Great American Bash, and countless other "Super Cards". He was a main event attraction for two decades in every major arena in the Country. He was a true Legend of the Squared Circle. And to many of us growing up in the Mid Atlantic territory he was not only a hero he was hope.

He was born with charisma that I don't think anyone could match, a mind on how to draw money and make wrestlers Super Stars, and a gift of interviews everyone who is or wants to be a wrestler should study.

That 10 second stand up interview 30 years ago and the weeks of TV building up for live events gave Jim Crockett promotions their first of many sellouts in Johnson City, TN at The Freedom Hall Civic Center. In fact they were turning people away 45 minutes before bell time. The match was a 20 plus minute blood bath that I remember like it was yesterday. The Dream did not have the fanciest moves nor did he claim to but his match was the one you talked about for days after you left the arena. He also had the match that drew you back the next time.

I had limited time around Dusty but my first time meeting him is a highlight of my childhood. I tell the story in my first book "Do Ya Wanna Be A Wrestler, Kid". My sister Autumn, my Dad and my uncle Odell made our regular trip to The D-B Dome in Kingsport to see the matches Dusty and Manny Fernandez defended the World Tag Titles against Wahoo McDaniel and Tully Blanchard in the Main Event that afternoon. After the matches we went to KFC. A few minutes after we got there in walked Stardust and The Ragin' Bull. I was 10 years old and I was shaking hands with The Champs. They ended up sitting at the table next to us. My sister and I could not help but stare at them. My Dad told us to eat our food and leave them alone. The Dream spoke up and said "it's ok the kids ain't bothering us". We ended up getting autographs and talking with them. I have crossed paths with Dusty a few times since I have been in wrestling but those are the first memories that come to mind when I think of Dusty. Why? Because he was a hero to many kids like me. I just have been blessed enough to be around my heroes.

My family will be praying for his. Thank you "Big Dust" for all the meories and what you gave to our profession. 10 Bells. 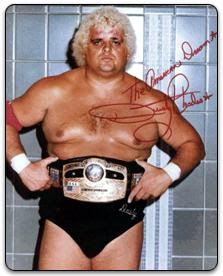