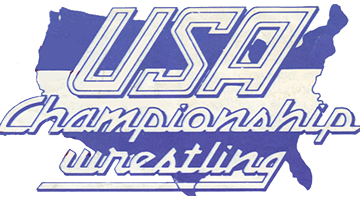 Thanks to everyone who took time to read and send me comments on my last blog on USA Wrestling and The AWA World Championship Matches. If you missed it you can scroll down my site here to see it.

As I have stated that USA Wrestling was a special part of not only my life as a fan but it was the beginning of my journey of the rest of my life. As I write this on July 23 2017 it marks the 29th Anniversary of me meeting Johnny and Davey Rich at a Wal Mart in Greeneville, TN on July 23 1988. If you have read my book "Do Ya Wanna Be A Wrestler, Kid?" you know that Davey is the one who suggested that Ron West and Bob Polk give me a job. Which they did in October on 1988. 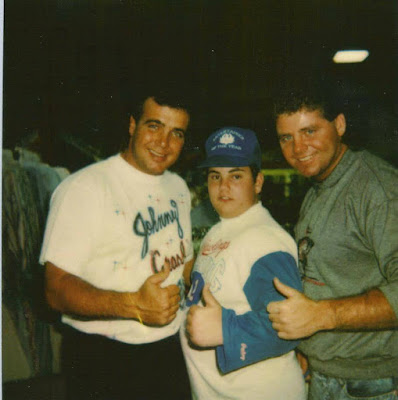 To me USA Wrestling was the last great summer of Territorial Wrestling based out of East Tennessee. I know Jim Cornette and others may disagree with me making an argument for Smoky Mountain Wrestling in the early and mid 1990s. Which they have a good case but to me it was USA. Maybe because it was my last summer as a super fan due to the following summer  being the start of my in ring career.

Also here is something that may shock you until the last couple of years I did not see alot of SMW. By the time Jimmy had opened up I was running Southern States Wrestling. My duties of running towns, promoting, in ring, booking towns, etc. took most of my time. Thankfully to the internet and my firestick I've been able to watch more SMW over the last couple years.

The internet and SMW are what brings me to my blog today. Early on in SMW they had a masked man called The Stormtrooper wrestle on some of their TVs. The Stormtrooper was a masked Nazi. To todays wrestling fan and especially the internet fans they can not grasp why such a wrestler was on TV. I've seen many attacks on Cornette for using him. Some think Jim was the man behind the masked grappler and even have attacked him for such. Guess what? Jim was not responsible for The Stormtrooper nor was the one on SMW TV the original.


The truth of the matter is that the original man behind the Swastika Mask was journey man wrestler Tim Frye. Tim had wrestled for Ron Fuller before in Continental as one of the Shoguns, El Lobo, The Mercenary, and himself. 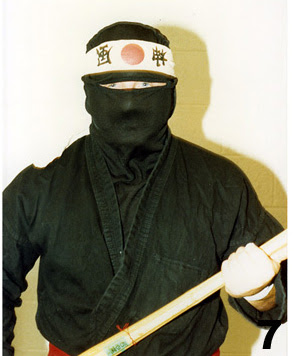 Tim was put under the masked and into Ron Wright's stable of Monsters. Ol' Brother Ron already had a Moondog from the Swamps, A Mongolian Stomper, and A large unnamed African American Man that spoke about Astrology. Tim was no where in size as big as the other men so they needed something to make him a monster. When I asked Ron Wright he could not remember who came up with making Tim a Nazi. It was either Wright or Ron Fuller. They both were drawing from their youth and the memories of unreal heat teams like The Von Brauners and Saul Weingeroff got where ever they went.

Ron Wright saw them as a teenage fan and reffed their matches early on in his in ring career. Fuller knew them well also, as they made a living wrestling for his Grandfather, Dad, and other Family members.


Ron Fuller just two years earlier had made well known veteran Chris Colt who had been in East Tennessee many times the previous 20 years as a Dupree Brother and Hell's Angel a Nazi. You may be asking why? Why would he do that knowing the feelings the Nazi Flag and Swastika bring out in people? Especially those older gentlemen and their families that were coming to the matches who had fought in World War 2. That is why he did it. Before wrestling was controlled by corporations, stopped being portrayed as a true sport , and every other rule broken. It was based on heat. You wanted heat on your heels. You did not want cool heels who did cool moves and people liked.

You wanted people buying tickets to see these nasty no good so and so's get what was coming to them by humble all American boy next door baby faces. A struggle of good vs. evil. The good being the underdog. How could The Rich Cousins, Armstrongs, or anyone else get a fair deal in a match when they were up against monsters who would do anything not just to win but to hurt them? Let's not forget that middle aged man at ringside who was as mean, nasty, tough, and under handed as they came in Mr. Wright.


This was not only a tool of getting heat. It was Ron Wright's way of paying tribute to men who helped him along the way in The Von Brauners and Saul Weingeroff . Ron began to carry a cane and wear a tuxedo. He in the past had wore suits but never like this complete with a hat like you see Saul wearing in pictures from the 60s. Ron in past had managed alot of great talented wrestlers. Thats what they were wrestlers who used holds and moves and Ron would only interject himself when he thought one of his men were going down. Now like Saul of the 60s and 70s Ron had a stable on killer heels, MONSTERS!. They went out there on TV and beat guys to a bloody mess. Ron did not have to help them in most cases but would be cause he like his men liked hurting people. The only time he had to help his men was in Main Events in the towns where you had to buy a ticket to see. He then went on TV the next week and lied about it.

Everyone in wrestling has borrowed from the ones before them. There is nothing new under the sun. Ron Wright took from men like Saul,  Bill Caney and even his childhood pastor that is where is interview style came from.

Wrestling would be so much better today if the lines were not blurred. If it was good vs. evil and you knew who was on what side. Sadly the style of true professional wrestling that I grew up on, studied, wanted to be my life, and battle to keep some semblance of it alive daily. Is just not what young wrestlers coming up or even younger fans want. A big part of it is because they just simply don't understand it. The complicate everything by picking it apart, over thinking it, and trying to be more than a fan. Go ,watch, enjoy you are already the most important person in the building a "ticket buy fan". Just be a fan you will like it even more.

The wrestling fans that filled buildings in years past wanted wrestling too. How do I know? Because they stopped coming when wrestling stop giving them wrestling. They turned off their TVs too and have not turned wrestling back on.

I was asked about wrestlers like The Nazi, Russians, Japaneses, etc by both HBO and CBS during our times with them over the last couple weeks. I explained it as I did here. I was then asked who would make a monster heel today? I told them a member of Isis but today's fans would be upset in a different way. It would be the wrong kind of heat. Folks it just ain't yesterday no more! 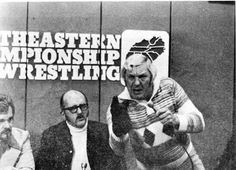 Once again thanks for reading my memories and thoughts. A reminder to check out my books and DVDs on the sides of this blog.

Check out the videos at the bottom of this blog

Tim Frye wrestling in WCW  in the early 90s