News about my health 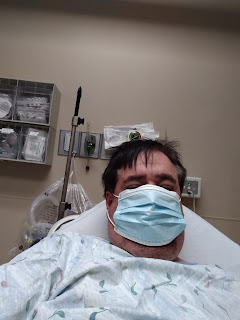 I've always heard stress is a killer. I truly believe that and fully understand that now. 2020/2021 has been the roughest time of my life no doubt.

In late spring of this year I went to have my yearly physical to renew my wrestling licenses. During the check of my vitals the nurse said my blood pressure was up. I told her I'm not surprised I've never had high blood pressure but I've been under a lot. I was then told my heart rate was accelerated.

When the doctor came in to check me he was concerned. I had an EKG. I was then ask when I thought I might have had a heart attack? I said well August or September of last year. Explaining why I thought that. I explained the stress that I had been under with my mother's passing, several dear friends passing, shut down of all our live events, separation followed by the divorce I didn't want.

I made it into Virginia and I found myself having some major issues. I ended up in the hospital. I found out on top of the heart I had other health issues that had to be faced head-on right now. They ran me through the ringer of every kind of test you can imagine. Mike died while I was in the hospital.

I saw my doctor two days after I got home. Was put on several medications and set up with the cardiologist. More testing was done more with more medications. Come to find out it was worse then we thought in the beginning.

I was told not to be wrestling, remove all stress, rest, and take care of myself. Well I'm stubborn and I'm a gypsy. I had a handful of bookings through the summer. I thought if I could do a town or two a month, be in the ring with people that will take care of me, and spend time on the road which is my home it'll help my mental state.

I've lived my professional life on television, the internet, podcast, and in front of live audiences. My private life has been that my private life. Very few people knew what was going on. Even fewer knew how severe it was.

I made the towns that I give my word earlier in the year when I took the bookings that I would be there. Thank God for my nephew Jake and my wrestling son Wayne Adkins. They got me there they took care of me they got me home. I fulfilled my dates and walked off into the sunset.

In early fall I made a couple of trips to Louisville and one to the Memphis area. Not wrestling just helping somebody that I helped train learn the road. The road is my home I thought well if I'm not wrestling, I'm just driving, sitting in the car and the arena I'll be alright. These trips took a toll on me like never before.

I knew I can no longer do this either. Not at least until I get healthy. The last cardiologist visit a few weeks ago I was told I need surgery. I need a heart procedure before the surgery to see how severe of surgery and what they're exactly going to have to do.

That procedure and surgery will be coming in January. I wanted to get through Christmas. I was looking forward to the annual S.S.W. Christmas event. It's an event to help my mother's favorite charity. We didn't get to do it last year and it killed me.

I realized I'm not even going to be able to put this thing together, do the work to promote it that needs to be done and to set up and tear down all that goes into doing a live event.

My nephew Jake stepped up and said I'll take care of it. He then got with several wrestlers. They all agreed to not only do the event for Hunger First but to make it a night for me. A night to help me in many ways. I will forever be thankful to them. A special thank you to the World Fighting Showcase for all they've done this year and what they're doing to make sure this event happens.

The event will take place Sunday December 26th 7:00 p.m. at The Model City Event Center in downtown Kingsport Tennessee. The card will be announced tonight on the official Southern States Wrestling page. If you're in the area I hope to see you there. I'll be sitting ringside with Waylon watching.

If you believe in the power of prayer as I do. I ask you to pray for me. If you can support the event on December 26th that's wonderful.

If you would like to maybe help me in another way. Think about subscribing to the Southern States Wrestling Network or my patreon. Looking for a Christmas gift for a wrestling fan? Buy one of my books on Amazon. Please know any and all support will be greatly appreciate it.

Thank you for your time, your thoughts, your prayers. I hope each and every one of you have a wonderful Merry Christmas and the happiest of holiday seasons.